I will be arriving in Chicago July 9 and leaving August 26.

No matter how dire things get, and no matter the personal struggle, a glimmer of hope arises in the heart of the Irish when it is announced: “At least it isn’t raining”.

I start today’s post this way because I am at a seemingly impassable obstruction in obtaining my license to practice as a registered nurse in Ireland. Every time I encounter a possible resolution to this obstruction my spirits rise and I move on in hope. Knowing that I have been at a number of potential resolutions the shine has almost been rubbed off the glimmer of hope.

The obstruction I am talking about is the process of applying to An Bord Altranais Overseas Registration. In fairness the first sentence on the first page of the eleven page information packet clearly states: “Please read information for applicants book before completing any part of this form”. Last July I read the document three times then sent my 200 Euros (258 dollars) to the Licensing board called An Bord Altranais. I received a packet with a check list and a cover page that states: if all required documents are not received within 1 year of receipt of application your file will be closed. If at that stage you still wish to be considered for registration you will be required to commence the application process again”. I should have considered this a warning more than a transfer of information.

I obtained all the certified copies,arranged for the appropriate forms to be completed and sent directly to Ireland. Leaving the United States in September I was confident each requirement had been met. I am a registered nurse since 1982 without any blemish on my record, I have a Bachelor and Master’s degree in Nursing and a national certification as an asthma educator. I served on committees at work and received public recognition for my work as a nurse.

By October I thought I should hear from the Irish Board. I wrote to them via e-mail and heard back that there was a problem with the Form B and they had not received Form A. I had a copy of Form B and sent it to my manager as she had not received it from the nursing board. My undergraduate program did not remember receiving form A and therefore went through the process of finding, completing, and mailing it to Ireland. This involved countless e-mails and was resolved by mid December 2012.

February 25, 2013 I received notice that My information had been reviewed and that I would need to undertake a period of adaptation and assessment in an approved hospital. If I would like to appeal the decision I had 56 days to do so. They advised that if I was not already here in Ireland that I should not come over without a confirmed adaptation placement and that either I or my employer would arrange for the adaptation. The adaptation would need to be completed within 12 months of the letter and that if not completed my file will be closed and destroyed.

It is now almost June; 3 months have passed since receiving the letter from the nursing board. I since have found that I cannot get an adaptation period at any hospital without an offer for hire. I cannot get an offer for hire without being registered. I cannot use the nurse advocacy organization without being registered. I wrote to St. Michael’s Hospital in Dublin in April and got the following response: “Although the Nursing Board list various facilities as providing clinical adaptation we are the only hospital providing a regular programme. You need to have an employer to avail of a clinical adaptation place. It is the employer who makes the application on behalf of a candidate. Due to high demand, my next available dates for adaptation and assessment will be in 2014.” The 6 week course payment is 1,000 Euros (Just under 1,300 dollars).

HSE stands for the Health Services Executive. The HSE provides all of Ireland’s public health services, in hospitals and communities across the country. I wrote to the nursing services department at the HSE almost a month ago with no response. I then contacted a member of the Irish Nurses and Midwives Organization a few weeks ago. I was advised to contact the Group Director Of Nursing for the mid- west region to see if she could offer any suggestion. I wrote to her via e-mail over a week ago with no response.

As the governing board is unable to help and no one to my knowledge is hiring nurses who have not completed the adaptation period, I continue to be without direction on how to proceed.It makes sense that the licensing board is separate from the hiring. What does not make sense is that an integral part of the process is inaccessible.

My newest hope is a referral from a friend to a new director of nurses at a local hospital. I spoke with her on the phone and was elated to be given the time. After listening to my story she is willing to look at the information provided to me by the An Bord Altranais to see if she can provide any assistance. Even if I pay for the course myself it will be worth the expense to be employed as a nurse in Ireland.

Each episode takes time; time I have now but with waiting lists I am precariously close to missing my deadline of February 2014. Who knew it would be so hard?

Well, at least it isn’t raining. 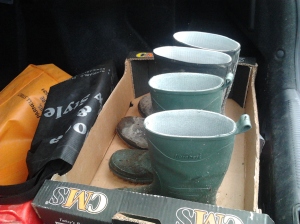 daily need virtually everywhere and every season in Ireland

November in County Clare is very much like spring and summer in County Clare. The temperature varies little. In the summer it rarely gets above 70 degrees Fahrenheit and the winter rarely below 32 degrees Fahrenheit. The air feels very much the same every day; the only difference is the frost and sometimes snow in the winter. Snow is not an event that the elected officials recognize as their responsibility to clean. Every activity comes to a standstill; sometimes peoples’ pipes freeze in their homes. The warning of frost is talked about for days at a time with people discussing their methods of coping with the ice on their windshield and the slippery roads. The governing bodies do send a truck to spread grit on the public roads prior to a known frost. The addition of grit to the frosty roads provides little comfort to the locals.

END_OF_DOCUMENT_TOKEN_TO_BE_REPLACED

Welcome to my blog! Ireland is about as big as Wisconsin but it is as diverse as the entire United States. I began my journey last fall but the postings started in February, 2012 when I came back to Ireland for a 3 month sabbatical. I hope you enjoy it. 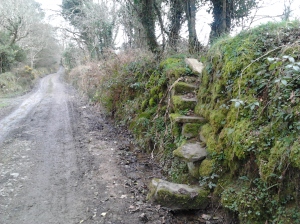 Follow me in my adventures as I traverse a culture and learn new phrases. 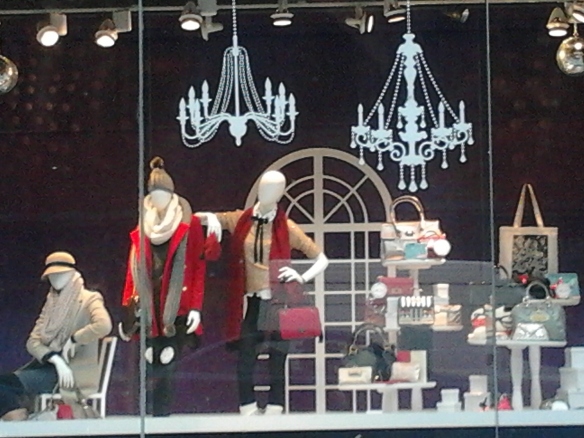 Let me tell you about my bus ride this morning. Rather than waiting at a bus stop at the time assigned by a timetable, the transit system here requires that a call is made to alert them you wish to travel on a certain date and time. Yesterday I called Clare Accessible Transport (http://www.catconnects.ie/) to notify them that I would be at the bus at 8:15 this morning. A woman by the name of Sinead answered the phone, took the reservation, and then texted me the following message: “Hiya Kate. Thanks for your booking, enjoy your evening”.  Although I was still fearful of my new experience, there was no backing out. END_OF_DOCUMENT_TOKEN_TO_BE_REPLACED 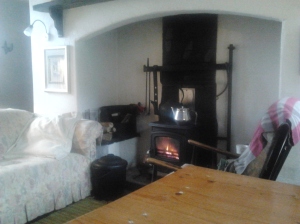 March 1, 2012
I am running my first load of laundry in a fascinating machine. It is both a washer and dryer. In the back of my mind I have worry that the water will come in contact with the electricity of the dryer and blow some fantastic fuse. Assurances have been given that this cannot happen. END_OF_DOCUMENT_TOKEN_TO_BE_REPLACED

When I first arrived I was met with a consistent look of shock and curiosity in equal proportions. People here are torn between attempts to allow others their privacy and an insatiable desire to satisfy their curiosity. Everyone fills in spaces of silence with their own experiences. Because the experiences of the people in this village are not the same as my experiences, the meaning of what is not said is so vague that it only sparks new questions. END_OF_DOCUMENT_TOKEN_TO_BE_REPLACED

Tonight I will bake a chicken. 180 degrees on this oven is 350 on the one in Wisconsin. My last episode with the oven involved a slight misjudgment on time and temperature.  The meal was to be fish with butter and lemon steamed in foil.
The fish was local and was fresh frozen. I defrosted it in the refrigerator and then prepared the recipe from the Cooking Light magazine to be baked at 450 degrees American. END_OF_DOCUMENT_TOKEN_TO_BE_REPLACED

The radio station here reports traffic and weather for the whole country minus Northern Ireland. Collisions are reported from Dublin to Cork. Surprisingly there are very few slowdowns considering the narrowness of the roads and the lack of shoulders at the edge of the roads.  When the weather is reported, a range is given and of course it is given in Celsius. Last night for instance the range was from 3 to 11. Weather system is also reported in a range from north to south.  Fair weather is hard to predict but one system that is on target is rain. END_OF_DOCUMENT_TOKEN_TO_BE_REPLACED